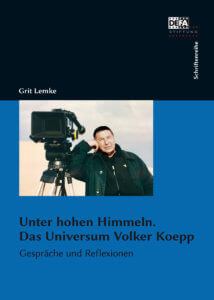 In five decades Volker Koepp has made over 60 documentaries, making him one of the few DEFA directors to have inscribed himself in international film history with a significant œuvre before and after 1989. People and landscapes, the past in the present are coordinates of this work, which cinematically maps the East Elbe region between Wittstock in Brandenburg and the former East Prussia all the way to Kaliningrad and down to the Black Sea.

How is a Koepp film made, what makes it, what is the famous „Koepp’sche Fragetechnik“, what role do women play in front of the camera and in the team? What about cinema and television, quotas and censorship? In larger and smaller discussion groups about and with Volker Koepp, people who accompanied his path and continue to do so to the present day give insight into their collaboration with the director and their encounters with his work.

Link to the publisher: bertz-fischer